Use Of Weapons (The Culture book 3) 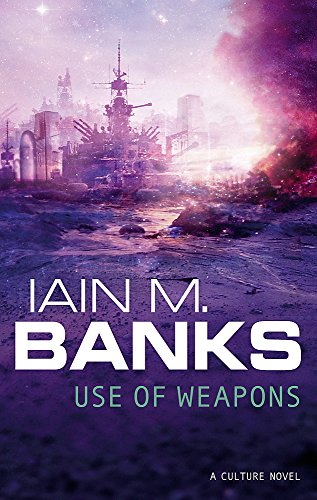 The man known as Cheradenine Zakalwe was one of Special Circumstances' foremost agents, changing the destiny of planets to suit the Culture through intrigue, dirty tricks or military action.

The woman known as Diziet Sma had plucked him from obscurity and pushed him towards his present eminence, but despite all their dealings she did not know him as well as she thought.

The drone known as Skaffen-Amtiskaw knew both of these people. It had once saved the woman's life by massacring her attackers in a particularly bloody manner. It believed the man to be a burnt-out case. But not even its machine intelligence could see the horrors in his past.

Ferociously intelligent, both witty and horrific, Use of Weapons is a masterpiece of science fiction.

I really enjoyed it. The story bounces back and forth between several timelines which can be a bit confusing at first, but by the end it all starts tying together and making some sort of sense.

The Culture elements are quite subdued though, so I'm not sure I'd really class it as a Culture novel. The story is much more focused on the individuals than their impact on the Universe around them.

This is widely hailed as the pinnacle of Iain Banks' Culture novels, and it certainly stands up to that level of praise. After reading his first two Culture novels, 'Consider Phlebas' and 'The Player of Games', I was expecting another hugely detailed foray into the massive universe of the Culture, and I was not disappointed. The story is told through the eyes of Zakalwe, a Special Circumstances agent of the Culture, whose job is to interact with and/or infiltrate less advanced civilizations.

Banks takes an interesting, and initially confusing, approach to the structure of the novel, splitting the story in to two separate chronologies, one running backwards. Altogether, this makes the story much richer, as Zakalwe's character is filled in both contemporaneously and via flashback.

Previous readers of Banks will know what to expect: graphic violence alongside brilliantly funny dark comedy, but the best aspect of the book has to be his characterisation. Zakalwe is incredibly believable, and Banks superbly outlines his reluctance to take up 'one last job' for the Culture.

Overall, it's an amazing novel, giving Banks the opportunity to show off the scope of his incredible imagination.

There is one copy available to borrow from the library. This book has 400 pages.