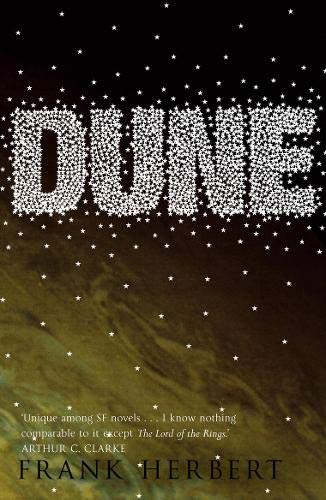 Probably the best story about LSD I know.

This review is not as in depth as Chris' as that is an excellent, succinct, spoilerfree description of an immensely in depth universe with it's own religions and political systems which make the book all the better for being gradually revealed to the reader through plot, subplot, treachery and manipulation.

This book is wonderful and diverse and even I, with my lack of name retention ability was able to follow who was who simply because of the way the characters are developed so very much that they have very obvious personalities and are recognisable in more ways than such a label as a name.

Also there have been 3 attempts at making this into an audiovisual delight but they have all faioled. Perhaps the worst thing about this is the version that was never made. I don't know why it wasn't but funding was available and as far as I can tell all parties ivolved were willing to procede but nothing came of it. originally it was to be directed by none other than Salvador Dali with a soundtrack by Pink Floyd - I can only guess it failed because of Syd Barrett going insane :(

Read the book - ignore the film

This is one of those "classic" stories that everyone should read at some point. Don't be put off if you've watched the film. Whilst the film is based on the book, it unfortunately leaves out crucial pieces of plot and stuff that make it a bit of a mess. Once you read the book, it'll suddenly all become clear :)

Anyway, it's set in a futuristic galaxtic empire where space travel is only possible because of a drug known as Spice. Spice is only found on one planet; the planet Dune. A hostile desert world that confers vast powers within the Empire on whoever rules it. So long as the Spice flows at least.

When Duke Leto Atreides is ordered by the Emperor to leave his lush paradise planet to rule Dune his family are reluctant, but follow him anyway. But their lives are soon thrown into turmoil as their rivals, the Harkonens, assassinate the Duke forcing his wife and son to flee into the desert. The story then recounts their exploits, living with the indigenous population and convincing them to help them rise up against the Harkonens and take the planet back for themselves.

Comment by Jaimie Moore on 2010/02/04 16:21
I overall would agree with this description of the book but I am afraid that Mr Turner's keyboard appears to playing up in places.

He quite clearly tried to say do not be put off if you've watched the film, the film is pile of awful crap whereas the book is a work of genius that makes a three hour train ride seem too short as you would rather stay in your seat and finish it. However it seems that due to some sort of autocorrect function or erroneous spellchecker this was changed to something "balanced".

I love this book.
Comment by Chris Turner on 2010/09/10 19:43
Yes, the film is awful, but there is a lot worse out there. But I stand by my comment that if people have seen the film, they should not assume the book is just as bad and that they should definitely read it (and the sequels).

There are 2 copies available to borrow from the library. This book has 608 pages.