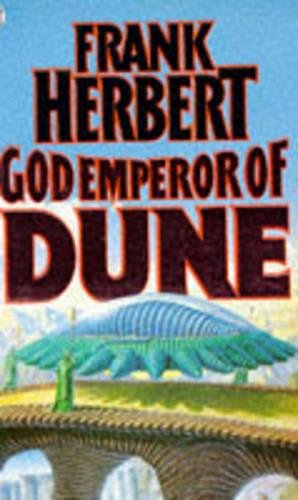 Book 4 in a trilogy - more interesting than intelligent.

Well for me this is where the Dune series stops being tightly controlled and impressive and becomes entertaning and epic. Originally we were meant to get a trilogy but that trilogy was so succesful that Herbert was given a chance to explore his universe furhter and we end up with this.

It is definatenly fun. It has a few new characters who are interesting and (set a ew millenia after the original trilogy) it allows Herbert to add ecology to the unusual disciplines of Science used in his SF. I don't want t say too much about the plot here because SPOILERS so basically one of the Atreides is now pretty much immortal (God Emperor) and we follow how this long-term dictatorship affects all of the fctions in the Duniverse that we have come to know and love. Some characters who are deifnately dead are somehow brought back to life purely to add another level of familiarity to the book. They get there through a very lazy "plot device" kind of way but they are interesting to have around.

This review seems a little vacuous and that's probaly because s does the book. You don't miss anything but not reading beyond book 3. If there is anything else you want to know about Dune go use a wiki. You will not get anything extra by discovering it for yourself using this novel. BUt if you (like me) weren't ready to abandon this series you will not be disappointed. You will be entertained throughout and not begrudge the time you invest in this book - just don't expect anything as original or intelligent as the Dune or Children.

There are 2 copies available to borrow from the library. This book has 464 pages.