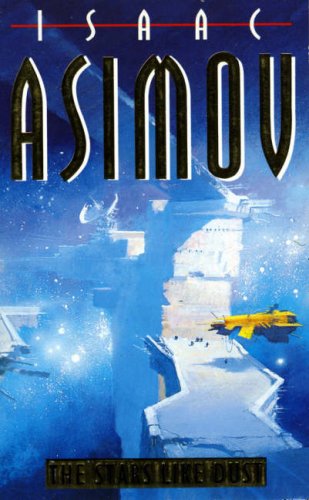 Second book released in the Empire series, but first in the internal chronology. A good, action-filled adventure in the same universe of the Foundation series, but with a continuous narrative rather than short stories fitted together.

Chronologically the first of the Empire Series by Asimov, this book is an interesting one. Whilst different to earlier works, which are short stories segmented together into a longer narrative, this is a novel proper.

The plot is an intriguing one and will leave any reader astounded. Brilliantly written, it will leave the reader in a state of awe. Thus, it continues the shining path of Asimov of breath-taking, well-thought out logical problems that lead coherently to the end of the book. Unlike sections of "I, Robot", there is not necessarily as much of the plot being driven by dialogue, with more action than usual, which in my view is a plus.

On characterisation, however, I feel there are some weaknesses. Female characters in this work seem to fall into more cliched roles that are not fully liberating, fulfilling typical literary tropes that do not empower them as individuals but rather keep them as some form of appendage to stronger male characters. Admittedly, this was first published in 1951 and so it is understandable. However, for those who would prefer stronger female characters, this is one thing to take into account.

Yet despite this, it is still a very good work of science fiction and to be highly rated, even if there is some vague eulogizing of bourgeois liberal democracy which later on proves incongruous to the development of the universe in which this novel is set. It is again a must read.

There is one copy available to borrow from the library. This book has 235 pages.