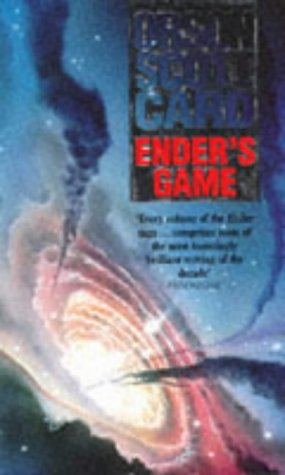 An alien race is threatening to wipe out humanity in a massive League war. And Ender Wiggin is the child chosen to prevent this extinction from of his own kind.

Selected by the International Fleet Selective Service, at the age of six he leaves behind his family on earth to make the shuttle flight to the Belt. There he enters Battle School, where his life is strictly disciplined to consist of mind games, computer war-games and mock battles fought with deadly earnest in conditions of zero gravity.

His genius at computer-programming, his killer instincts and his compassion combine to make Ender unique. And he is pushed to the limits of human endurance to fulfil a unique destiny in the fast-approaching invasion which will decide the future of mankind.

A worthy book to read

I really enjoyed this book. It has a pleasant pace that doesn't drag on or rush through things. The characters aren't that two dimensional which is often a problem with stories from the 70s. And the story, despite the fact it's about taking very young children and turning them into soldiers, is an interesting one.

There are some very interesting philosophical points it makes about how two alien species would react if they ever encountered each other - especially when their means of communication is so vastly different.

For those of you who don't read books, but do enjoy movies, the recent adaptation is moderately faithful. It trims a few side plots out and makes the child characters a fair bit older, but over it still retains the core themes and ideas.

There is one copy available to borrow from the library. This book has 336 pages.