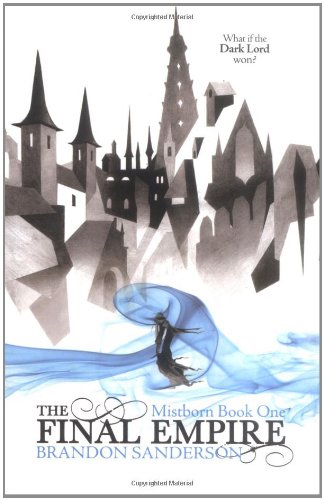 Yet somehow hope survives.
A new kind of uprising is being planned, one that depends on the cunning of a brilliant criminal mastermind and the courage of an unlikely heroine, a Skaa street urchin, who must learn to master Allomancy, the power of a mistborn.

What if the prophesied hero had failed to defeat the Dark Lord? The answer will be found in the Mistborn trilogy, a saga of surprises that begins here.

I enjoyed this book a lot. It's quite a refreshing change from a lot of fantasy novels that I've read. The most notable thing that is different is the magic - it all revolves around metal. Certain members of the population have the ability to ingest certain metals or alloys and "burn" them to produce a specific magical effect, such as increasing their senses or pushing/pulling nearby metal objects.

The latter two powers (they use separate metals) are used to great effect by the characters to fly about the place as the powers don't negate the laws of physics. So that if they try and pull or push something that is heavier than themselves or isn't able to move, they themselves are moved. Most people if they are blessed with this gift only have the ability to use one of the metals and are called Mistings, but some - the Mistborn - have access to all of them.

The world isn't overly described, but that is in itself, part of the plot - we and the characters have no real idea how the world came to be the way it is. It's a harsh world with the sun all but blotted out by clouds of ash being pumped out by several volcanoes. Most of the population are treated little better than animals by the ruling class who routinely beat or even kill them to keep them in line.

Which brings us to the basic premise of the book; a group of experienced thieves, each a Misting and led by a Mistborn, Kelsier, seek to do the seemingly impossible. Start a rebellion in the nation's capital, take down the tyrannical immortal Dark Lord and rob him of all his atium - one of the rarest and most expensive of the metals that for those who can use it, lets them glimpse the future actions of those around them. It's mostly told from the point of view of Vin, a powerful Mistborn who the group discover and rescue from a life of destitution and gang violence.

Also one thing in it's favour, is that whilst the book is the first in a series, it works very well as a stand alone book. There is clearly plenty more of the world and story to be told, but there isn't the typical cliffhanger at the end. Ideal if you want to dip your toes into a new fantasy series, but don't want to commit your life to reading the series forever.

We have no copies of this book in the library.