Fellowship Of The Ring (The Lord of the Rings 1) 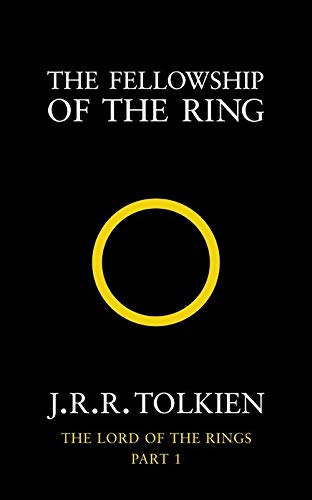 Continuing the story begun in The Hobbit, this is the first part of Tolkien’s epic masterpiece, The Lord of the Rings, featuring a striking black cover based on Tolkien’s own design, the definitive text, and a detailed map of Middle-earth.

Sauron, the Dark Lord, has gathered to him all the Rings of Power – the means by which he intends to rule Middle-earth. All he lacks in his plans for dominion is the One Ring – the ring that rules them all – which has fallen into the hands of the hobbit, Bilbo Baggins.

In a sleepy village in the Shire, young Frodo Baggins finds himself faced with an immense task, as his elderly cousin Bilbo entrusts the Ring to his care. Frodo must leave his home and make a perilous journey across Middle-earth to the Cracks of Doom, there to destroy the Ring and foil the Dark Lord in his evil purpose.

Pretty awesome read for anyone who loves fantasy; readers of other genres will probably love it as well.
If you've only seen the film and not read the books, be very ashamed of yourself!

Comment by Mohamed Ansar on 2011/02/23 18:49
I am a philistine, in that I can't get past the opening chapters because Tolkein keeps talking about what interesting things happened next to specific trees. I might be able to get through it when I get a longer attention span. Although that means I'd have to deal with Tom Bombadil.
Comment by Andrew W. on 2011/02/23 19:14
I managed to get through the entire trilogy, twice.

I don't think it was worth the effort. And "effort" is the appropriate word, never a good thing for a supposedly wonderful series of novels.

There are 3 copies available to borrow from the library. This book has 432 pages.